As you can likely tell from my blog, I like certain types of decks. While I will always enjoy playing an aggro deck and turning a bunch of creatures sideways, my favorite type of desk is control. I prefer to determine what hits the battlefield, and what is allowed to stay there. I enjoy having 7  cards in hand, and passing the turn to my opponent with all of my mana untapped. Do I have a counter? Do I have a removal spell? Do I have a draw spell? Am I just sandbagging a bunch of land? My opponent has to guess, and guessing wrong could determine the outcome of the game.

I'm here today to preview a Scrying card, and it is definitely a card I can see myself playing. Let's take a look at it before we talk about it. Without further ado, I give you Sacred Mesa.

Look at those beautiful flying horses.

OK, let's talk about this card. It makes an endless supply of 1/1, Flying creatures, for the low price of 1W each. Having access to evasive creatures on demand means this card is a must answer card for your opponent. Left unchecked, this will take over the game and eventually win it for you. This slots perfectly into a control deck, as you now have something else to do with your mana on your opponent's turn that they have to consider. If they do not force you to use your mana to counter/remove their cards, you can just pump out a bunch of pegasi to attack with. We also now have access to instant speed blockers. Sure our opponent knows about that, but now we have the decision on whether to block with a pegasus or use a removal spell on an attacking creature.

The downside is that you have to sacrifice one every upkeep, or bury the enchantment. However, they are cheap enough that meeting that condition should not be difficult. What it does mean is that you cannot play this on curve as a 3 drop, as you will not have the mana open to immediately create a pegasus to sacrifice. Sure, you could make one during your upkeep and sacrifice that one, but who wants to do that. Instead this is a card for later in the game, when you can play it and hold up the mana to activate it.

I look forward to playing with this card in a control deck and seeing if it really works as well as I want it to work. 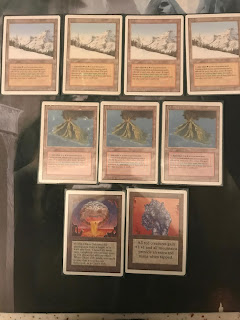